About Us Free (Great) Wedding Speech Samples Let An Expert Write A Great Speech For You Contact Us
Mother of The Groom Speeches--How to make your son feel special and loved on his wedding day.
Groom Speeches : Do you know that this can calm your nerves? 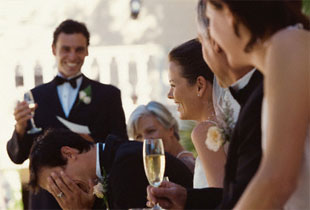 Usually, the wedding reception is moderated by an M.C. The Best Man may act as the MC in case the Master of Ceremonies is not around.

Though the order of giving wedding speeches has changed in recent times, the father of the bride is expected to speak first. After a short self-presentation, he proceeds to talk about his daughter and how much she means to him. He also talks about his son-in-law . He toasts to the couple and the groom’s family.

The next  is the groom’s speech. The  groom is  the head of his new family, and his speech has to be impressive. After thanking the audience, he shares his sentiments about the day and how he met his wife. He then toasts to the bridesmaid and both families. He offers thanks to persons who have supported him and his wife in planning the wedding.

The best man’s speech comes next after the groom’s speech. He greets the audience and tells the guests how he felt when his brother/friend asked him to be best man. If he’s good at cracking jokes, he should make sure his delivery is funny. If he isn’t, he should pick a style of presentation that’s unique to him.

The best man reads messages, emails, facebook comments he’s received from persons who couldn’t make it to the reception. He ends his speech with a toast to the happy couple and the bridesmaid.

The order of giving speeches varies per culture. The above isn’t a rigid formula. Find out what’s accepted in your culture and what’s not. Then change the order to suit the occasion. For instance, some cultures permit women to speak in public while others don’t.

The couple should always decide who gives a wedding speech and who doesn't.

P.S ---Is The Thought Of Giving An Amazing Speech Driving You Nuts? When You Get In Touch With Our Wedding Speech Writers, You’ll Kiss All Your Worries Goodbye

Click Here Now To Connect With Our Wedding Speech Consultants

The comments to this entry are closed.